In the big game of Snakes and Ladders I have just hit another slippery customer that has dropped me a few lines – this time expressed as decreased liver function.  Never a dull moment for a leukaemia patient.  Up one week and down the next.

But the news on the liver function is troubling.  The team cannot say what is causing this drop in function (about 4 times worse than last week), but believe it could either be a virus, some structural damage from my earlier GVHD or perhaps a recurrence of GVHD.

I had just dropped my steroids from 25mg to 12.5mg for the gut GVHD and now I find myself back up to 50mg to treat the liver, plus another drug Ursofalk (ursodeoxycholic acid).  This will take the daily tablets to around 25 – just when I was down to just 6 daily a week or so ago!

I will have an ultrasound of the liver on Friday to try to determine exactly what the cause is.  Hopefully I will know more by next week.

Despite this I have been feeling quite well over the last few days and have been able to increase my exercise regime a little in an effort to regain some sorely missed muscle mass.

Last Friday we both attended a Cancer Conference at Peter Mac.  It was generic to all cancers and covered things such as well being, exercise, diet etc etc.  There was little new information for us but it certainly reinforced the importance of the things I am concentrating on at the moment – good diet, regular exercise, and mental well being.

We had a little surprise on the weekend with Jan being admitted to hospital for a day with an irregular heartbeat.  In fact she was diagnosed as being in AF (Atrial Fibrillation) by her GP on Saturday morning and her cardiologist made arrangements for a bed at the Epworth, Freemasons hospital in East Melbourne.

The boot was suddenly on the other foot with me turning into carer and Jan the patient!

Luckily after some minor medication the heart rate returned to normal and Jan was discharged on Sunday morning.  There will be more discussions with the cardiologist next week and in the meantime the doctors say it is just ‘one of those things’ and there is nothing of great concern.

Of course everyone is putting this down to the stress of looking after a sick husband, but in reality it is just one of those things.  Her Dad has a pacemaker and has been through AF in the past, as has my father.  Perhaps it was the newfound uptake of coffee, but that has now been dropped just in case!

Claire joined us on Friday to catch “First Man” at the keno theatre.  This movie covers Neil Armstrong’s life in the the years leading up to and including the landing on the moon.  There were many scenes where you felt like you were joining Neil in the rocket with all the vibration and noise (Jan is convinced it caused the AF!).  We get a great insight into Neil’s family life and the stress and strain of the life of an astronaut.  I’d recommend it to anyone happy with a non-violent, feel good movie.  The question of course remains – why haven’t they been back to the moon after all these years?

Jan was away with GGS business on Tuesday so Dougal stepped in as my support person for the day.  We walked up to the hospital and back – about 40 mins each way.  We had our regular catch up with fellow leukaemia patient, James (and Victoria) Watson at the hospital this week during the blood giving ceremony – they almost feel like family!  James is progressing well and was due to have his PICC line removed today. 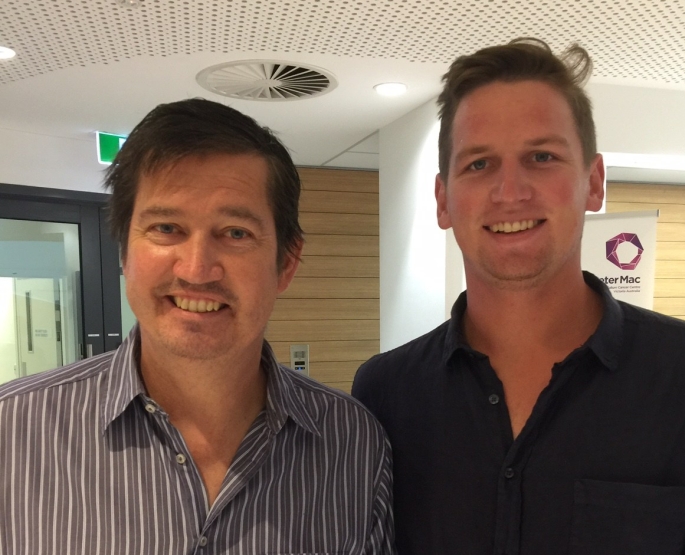