Haematology is an interesting medical area.  One minute my blood counts are doing really well and the next things seem to take a turn for the worse.

Today’s blood counts were all down on last week.

Hb is now 80 – I will require a blood transfusion this week.

My White Cells WCC are down to 2.4 which is just outside the ‘normal’ range but not low enough to be of concern.

And Platelets have dropped to 24 which is quite low and these may need a top up as well.

Neutrophils have dropped to 1.1 which is now outside the normal range and something to keep an eye on.

The question is what has caused this drop in blood counts in just one week?

And this is where the haematology gets fascinating. It may be because I am weaning off the steroids resulting in a drop in Stem cell production (Steroids can boost the stem cell production of red blood cells and platelets). Or it could be that the cyclosporin levels are too low or too high.  These things seem to be at opposite ends of the spectrum!!

On the one hand they tell me that it might be because I have another different presentation of Graft vs Host Disease and my immune cells may be attacking my red blood cells but on the other hand it might be that the immunosuppressant drug Cyclosporin is causing breakdown of the red blood cells. They are going to look at my blood under the microscope to see if there is any signs of haemolysis (red blood cell destruction) which will allow them to make a decision regarding the ongoing doses of Cyclosporin, it will either be increased or deceased depending on what is causing the drop in my red blood cell (Hb level) and platelet count.

There is a possibility that the graft which has taken is not functioning correctly in terms of the bone marrow production but more tests will have to be conducted to confirm this.

This is a puzzle for the haematology team and one I am hoping they can work through over the next few days.

Either way I expect to find out more on Wednesday when I go back in for a blood transfusion. I haven’t needed one of these for a month or more so it is a little step backwards but hopefully not too much of a set back. 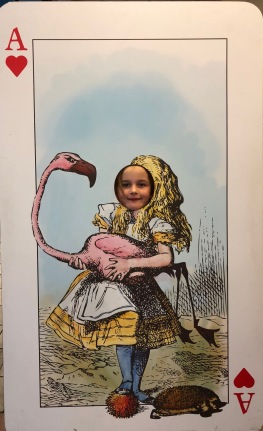 On the weekend we spent some time with Jan’s brother and family taking  in a kids show at the Arts Centre – Hunting the Snark.

We also managed to see the Alice in Wonderland exhibition at ACMI which the kids loved.

We (Jan and I) also saw a film called “Terror Nullius” at ACMI- the jury is still out on this one.

And on Sunday we caught up with Nick Middendorp and his lovely wife Jo for lunch at the Royal Brighton Yacht Club. Nick is a keen sailor but is smart enough to crew on a mate’s boat rather than own one!  Nick is the man behind “Middy’s” Electrical and they have just opened up a new shop in Wagga next to Signarama.  They have a fantastic business model offering all sorts of sustainable solutions for power usage in businesses and households.  They now have outlets all over Australia with about 400 plus staff – a big business indeed.