It has been a while since I’ve written a blog mainly due to the fact that there has not been a lot of new news.

I had the normal visit to hospital last Wednesday and Friday for blood tests and top ups with IV fluids.  This went well although you can easily spend up to 4 or 5 hours in the hospital with this process. In fact on Friday we had to wait 1.5 hours after the IV fluids to see the registrar who was running a little behind in her schedule.

On Friday I also met briefly with head consultant Amit Khot who was happy with my progress.  He was reviewing some diarrhoea that I currently have to make sure it is not “Graft vs Host” disease which shows up as significant diarrhoea together with vomiting and headaches.  I had been feeling pretty low for a few days.  His verdict was that things were OK and just to take some diarrhoea medication – which seemed to help.

The platelets are the key number now to look at to determine how well the graft is taking to my body and the doctors were happy with what they saw.

I still have to keep my daily fluids up to around 2 litres to keep my kidneys functioning in the right manner.  The Creatinine level is the best indicator of this and if it is greater than 150 the team apply a second bag of IV fluids to help flush them through.

My weight has stabilised at 78kgs which is about 5kgs below my normal weight.  Even though I’m not eating much this good news.

The medical team also cut back the tablets determining that my liver function was back to normal so that meant dropping off another 4 tablets a day.

I have been sleeping well over the past four or five days, still with the help of a sleeping tablet but at least I’m getting 7 or so hours of mostly uninterrupted sleep.  This makes a big difference for the next day!

We had a few visitors over the weekend and made a few excursions in an attempt to mix things up.

Julia Ham made a visit on Friday night for a good catch up on local Wagga news – we spent a few hours together which was great.

Jan’s parents Helen and Allen Sheridan visited on Friday afternoon and again on Saturday morning.  They were down to see the AFL-X which didn’t impress them that much!

Then on Saturday we had a special visit from John and Sandy Hawkins, our ex neighbours from Wagga.  They had lots of news and it was terrific to see them again.  They stayed for lunch on Saturday but unfortunately with my still very small appetite I wasn’t able to eat much with them.

On Sunday we made a big walk down to the NGV to see the Triennial Exhibition which we had partly seen before but we had missed out on the famous ‘skulls’ exhibit which we were very keen to see.  This excursion took around 4 hours and about 11,000 steps so I made sure my exercise was taken that day! 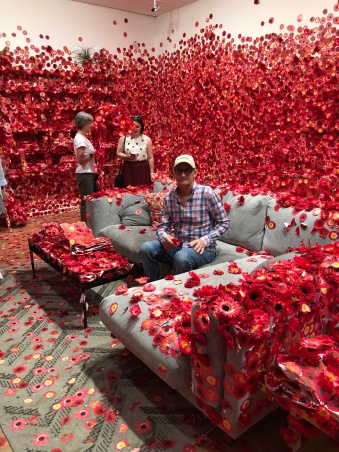 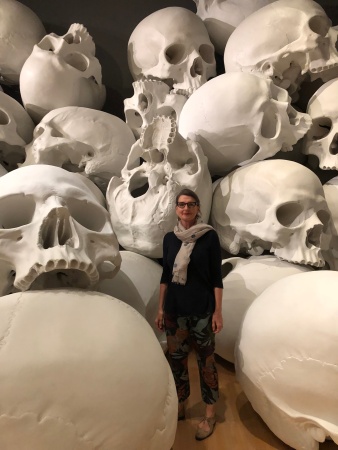 I will keep you posted as more or new information comes to light but that might only be weekly now as the doctors will be dropping my visits back to twice a week if all goes well with tomorrow’s visit.