The weekend was pretty much straightforward with no medical complications and no visits to hospital required.

Jan and I managed to spend some time with Lachy looking at Motorbikes on Saturday as he is contemplating joining the ‘Dark side’.   It was fun to see what sort of bikes he is interested in with the Indian made “Royal Enfield” the front runner at this stage. 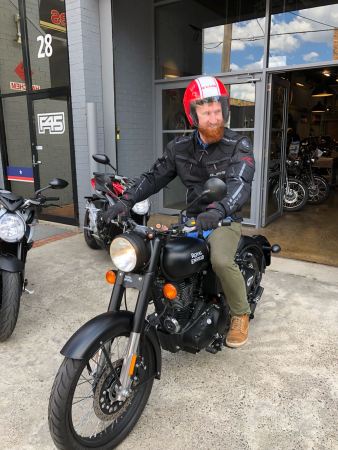 Sunday involved a big walk into town to buy a summer hat and a few other bits and pieces including a belt for Jan.

Monday was a big hospital day which was not entirely expected.  I had to have my first dose of tablets at 7.15am as the blood tests for Cyclosporin levels need to be done exactly 2 hours after taking the tablets.

We chose to walk to the hospital, which took about 45 minutes, for the blood tests at 9.30am. In the waiting room we caught up with some other patients including Tyrone from 7B who had made the same journey as myself.  Whilst they all had different stories to tell their message was the same – it takes time, don’t expect a miracle!

After a cup of tea it was off for the doctors appointment he went through some interesting facts:

So the doctor made arrangements for me to get a top up of IV fluids which took about 2 hours. Luckily I had a TV screen in my room and watched the Super Bowl final which was hardly exciting but never the less somewhat interesting.

Following the IV infusion I had my new PICC dressing changed with took about 30 minutes and then my day at hospital was over at 3.00pm.

I walked home again (Jan had gone off to an appointment) and then took a well earned rest.

So for the foreseeable future it is hospital visits every second day and IV fluids on most visits to top up the missing magnesium.

I will keep you posted once or twice a week as things come to light.