I didn’t write a blog last Friday after our hospital visit as there was not much to say, without any new results – but today is different!

Despite initially saying I probably wouldn’t get the results today by the end of our 4 hour visit they had come through – and yes all clear.  This means in the Bone Marrow Biopsy the doctors could not find any sign of Leukemia which is terrific news!  I am still officially in remission. We had been sweating on this result for over a week.

In other things that happened today:

My magnesium levels are quite low at the moment being around 0.55 which is largely a result of the Cyclosporin immunosuppressant drug.  This drug is also still affecting my kidney function hence the 2 litres of IVfluid on top of the 2 litres of fluid I drink each day.

My haemoglobin results were also very low today at 84 (not quite at transfusion stage but close) and this may explain my lack of energy during the day.

I also dropped off a specimen for testing to check on my diarrhoea which has been reasonably constant for the past few weeks.  They will check for a virus or bacteria but itwill take up to a week to get the results.

After a review of the Cyclosporin I received a message from the hospital late in the afternoon that I could drop this dose again to 175mg rather than 200.  The team are obviously worried about my kidney function.

I also picked up some extra heavy duty sleeping tablets as I have not been sleeping well since coming out of hospital averaging around 4-5 hours a night which makes for a tough day following.

And rather than drop me back to 2 visits a week they are keeping up with 3 just to ensure I get sufficient fluids and that the magnesium levels are correct.

In other news over the weekend we had a visit fromLisa McSweeny, who had driven her daughter down from Sydney for college.  Lisa popped in for a cup of tea on Saturday afternoon.

And on Sunday we ventured out for our first social excursion to catch with friends Mike and Nicole Gilfedder at a lovely brunch hosted by Jeremy Twigg and partner Nes.  We also returned a bike we had borrowed from Jeremy when Claire was over at Xmas time. 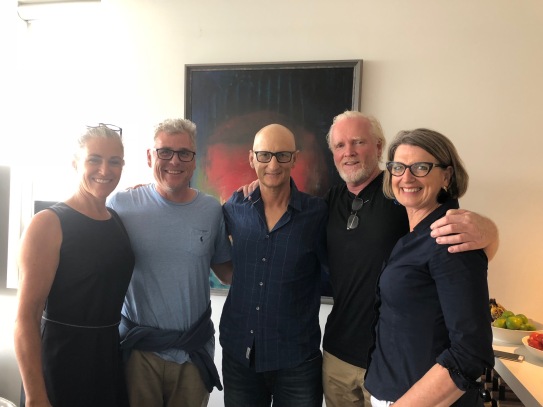