The doctors had advised me that generally the first week post transplant is OK and it is the second week that things get interesting (well they say you get sick!)  And completely in line with this plan the Freight Train smashed into me on Wednesday and was still dozing me along the track on Thursday.

The tell tale sign is a fever – temperature over 38 degrees followed by diarrhoea and aches, pains, even shortness of breath.

For me it was the diarrhoea first, then severe pain in my throat.  My mouth has begun to form ulcers but as this stage they are under control.

Today I had two units of blood and one of Plasma as both counts were getting very low.

My appetite has crashed and although I can drink fluids my sore throat restricts this to small windows after drugs.

So what are the Drugs?

Apart from the original 6 they have added IV panadol, IV Fentanyl (similare to morphine really), IV pethidine  and oral cocaine mouthwash.  I now feel that I am legitimately supporting Melbourne’s drug cartel! 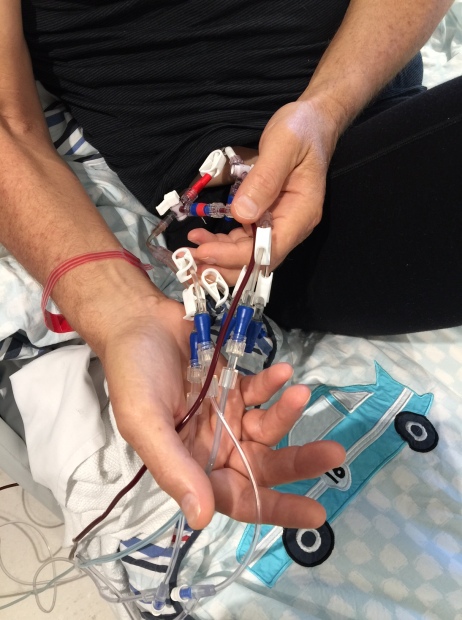 I have been upgraded on the Main Line connectors moving from a 3 way tap to a ‘chooks foot’ system which can take up to 8 different IV lines.  This is to take multiple IV drugs simultaneously.

The cocaine mouth wash is interesting as once you swirl it around in your mouth it certainly takes the edge of the pain.

On top of that I am back on the ‘Uber Eats’ IV drip nutrition – mainly because I can’t swallow much at all.

The medical team seem pretty relaxed about it all.  As Joe, one of the interns says, we measure everything and there is a protocol that follows.  Pull one lever here and push another over there.  It all works out in the long run.

A few nice surprises came my way over the past few days.

Lachy bought me a second hand guitar to get me underway with guitar lessons – a big challenge there but I’m up to it.

Phil and Mandy Locke sent me a very challenging jigsaw puzzle which may have ot go on hold until the chemobrain clears. John and Jodie Coles sent down a fabulous game Kalaha or various other names around the world as each of my nurses says they grew up with it.  So far 2 draws one win one loss with Jan!  Much better than Bananagrams I think!

Phil also managed to dig up some old photos from our European backpacking days in the 1980s – I certainly had lots of hair then!

Sparky our family pet has been air freighted with ‘Jetpets’ from Launceston to Melbourne as Lachy feels he has plenty of space in the backyard of his new rental (and of course will walk her daily!). Dougz was very happy to collect her from Tullamarine this afternoon. Lets hope she slots into City living like we have. A big thankyou to Knox and Cate Heggaton for playing babysitter – you are both wonderful!