Sunday was a nice quite day with our only visitors being Knox and Cate Heggaton from Tassie.  Knox leases our farm in Tasmania and does a fantastic job keeping the livestock in good health and the irrigators functioning!  He is a long-time friend from the 1980s when working on my Dad’s farm as a Marcus Oldham student.  Cate is gorgeous and runs her own woollen wares shop in Launceston.  She has kindly offered to look after our pet corgi Sparky (and in fact taken the role of surrogate mother from our ex neighbour Jenni Butt – sorry Jen!).   Sparky has taken to the healthy food in Cate’s garden!

Monday was also a quite day but we managed to catch up with Jason and Caroline Ennels at their Café in Malvern.  These guys are keen golfers and spend as much time as possible on the course.  Caroline is a long-time friend from our university days at Trinity College in Melbourne.

Tuesday was another day of tests – this time a kidney function test.

The lead consultant on the transplant team, Amit Khot has been concerned that my kidney function is not up to scratch as a result of the Ambisome treatment – a side effect of this drug which has been used to treat my lung infection.  It seems that there is a linkage with all treatments – one will affect another and this might also affect something else.

The tests involved a nuclear medicine tests over a 4.5hr period.  Initially a nuclear isotope was injected into my blood stream and then samples were collected hourly.  The red blood cells separate from the plasma and this is then spun off in a ‘Wells’ machine, with the nuclear sample being counted to see what has been screened by the kidneys and what is still left in the system.

The Wells machine to count the isotopes 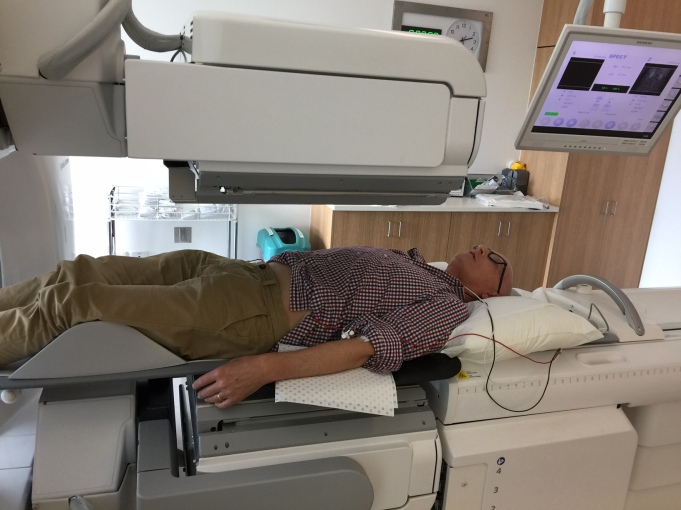 Under the scanner for kidney function tests

The final test was a Scan of the kidneys after injecting another isotope.  This one lasted for 20 minutes and it is possible to see the concentration of the nuclear particles in the kidneys and the bladder.

Following these tests we had a meeting with Amit and on his recommendation the Stem Cell Transplant (for bone marrow) will most likely be delayed until early January.

Amit will wait for final test results on Wednesday morning (en route to Altanta, USA for a haematology conference!) but at this stage this is what it is looking like.

So my plans change again! It now looks like the next round of Chemotheraphy will start after Christmas with the transplant on or about January 4th .

In one sense this is slightly disappointing but the positive is it gives me a chance to spend some time with family over Christmas, which I was not expecting.